The Humane Society of West Texas
Reach out to us: HSWT.org@gmail.com 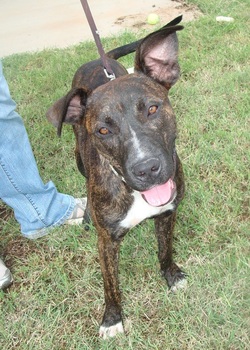 Charity was a 1 year old stray female brindle Boxer mix who wandered into another local charity's office. When she was taken to be spayed, the vet diagnosed her with a congenital heart defect called Severe Pulmonic Stenosis. Without surgery, Charity would die of heart failure by age 2 (the pressure from the defect would deform her heart). But we couldn't let that happen! Through generous private donations and fundraising, we raised the approximately $3,000 needed for her heart surgery. The heart surgery was completed in October 2012. In January 2013, Charity's follow-up visit revealed that her heart healed incredibly well. So well, in fact, that Texas A&M Veterinary Hospital is using her as a case study! She does not need any special treatment or medication and now has a normal life. 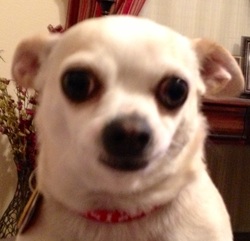 "We adopted Butterscotch at Petsmart in 4/2012.  When I saw "Butter" in the cage she looked at me with her big eyes and I just had to carry her.  She was very shy and reserved but still managed to give a few kisses.  I took her home and Butter has become the best dog I have ever had!!  She is potty trained now... I just had to spend a little time teaching her to go potty outside but she picked up rather quickly.  She is wonderful with kids too!  She is truly loved and we are so lucky to have her!!!!  Thank you for all that you all do for the animals." Melissa 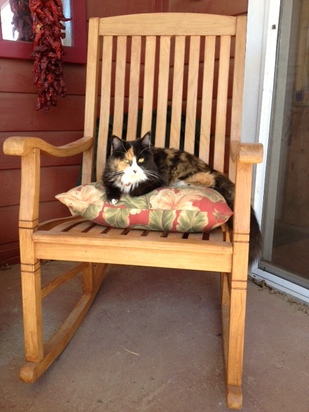 From Mary, an HSWT volunteer:  "I fostered this kitten and when I first got her, she was so thin--only skin and bones truly--that I wasn't sure she would survive.  Not only did this little scrapper survive, she thrived and became the regal young cat you see below.  She has a wonderful home with people who don't mind that she has come to be their queen." 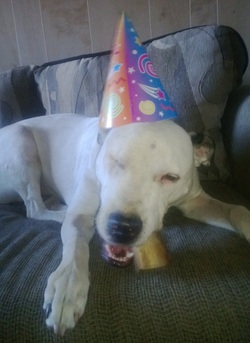 J-mac was found by a Good Samaritan in a freezing puddle on a winter day in early 2012. He was just a tiny, young puppy. He was hypothermic, needed special medical care, and had a seriously infected eye that was swollen and blind. Thanks to generous donors, his blind eye was surgically removed. He grew big and strong and was adopted by a loving family who renamed him Bugsy. This photo is from his first birthday party. We're proud of him for putting up with the hat. His mom sent us the photo and this message: "Thanks so much for finding him and allowing him to be a part of our family!!!" 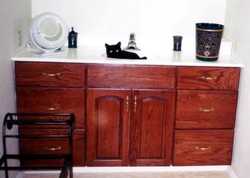 "When I lived in Lubbock forever and a day ago I found my precious little black kitten Smudge from y'all. It was my first introduction into the 'Adopt, Don't Shop' frame of mind, and I have never thought anything else since."

From Stephanie, about her HSWT adoptee Smudge: "She has been at the Rainbow Bridge for awhile with my other precious babies, but I will never forget that tiny little ball of ink who turned into the most professional sink surfer I have ever known. My sweet girl.

When I got her, she was so tiny, about half the size of a soda can all curled up! She was at PetSmart, and I went into there thinking I was just going to look. There were about 8 kittens in the one cage area, and I kept hearing someone yelling. Sure enough, way in the back, was this tiny black smudge with giant owl eyes yelling her head off. I told the guy she was the one, and he put her on top of this filing cabinet while he grabbed a little cardboard carrier. She took a flying leap off of the cabinet, and all we could do was just cringe. He said that I could pick another kitten in case that one broke, but she looked around like it was perfectly normal for tiny kittens to impersonate Superman. It was love at first sight. I took her home to my apartment across from campus, and she would always want to sleep in the covers at the very foot of the bed. I would wake up five million times a night, just positive I was going to smother her with my feet, which were five times her size. She took to hitching a ride on the back pocket of my jeans through the apartment, and the cutest thing ever was that she would hide at the bottom of the *tan* carpeted stairs to ambush my foot. Any time anyone would go up or down those stairs, Smudge would hide with just her black little ears and owl eyes peeking over those tan stairs. Every time I made the four hour trip home, she would meow the whole way. One meow every 15 seconds for four hours, a smirk on her face as she got comfy in her blankies in her carrier. I got super sick at the time, and I ended up having to quit that stint of grad school to have major surgery. Any time I was hurting so much I couldn't move, Smudge would very carefully stretch out across my tummy and purr, sometimes for hours at a time. Somehow that angel knew that she could make me feel better.

The second photo is of our professional sink surfer and part-time floor ninja. We were remodeling the house, and she insisted on keeping the sinks warm. Once we pulled up a single floorboard in the kitchen flooring to wire two sockets, the whole thing was open for less than five minutes. We were just about to nail the board back down when Smudge let us know she was down there and would be up when she got around to it. Two days later, after having to put food and water down in that hole since she stubbornly would not listen, she came up like she had just gone into the other room for five minutes. I still wonder what she was up to underneath that floor. 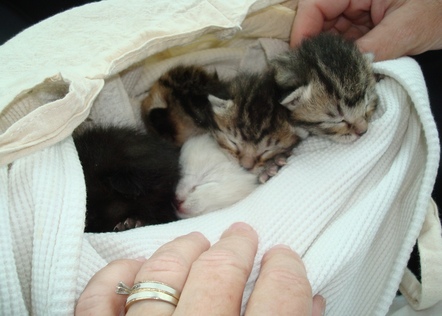 These 5 precious babies are between 7 and 10 days old. They were born under a work building to a stray cat, and today the cat didn't return and the babies were crying. So one of our volunteers went through the crawl space, crawled 15 feet under the house, bundled them into a canvas bag, and got them out. The babies were very cold since they are unable to generate their own body heat. They were so cold that the thermometer didn't register their body temperature. Even if the mom cat had returned and tried to feed the babies, they would have choked; when a kitten's body temperature is under 96 degrees its throat won't contract (peristalsis). And they would not have lived through the night.
Saved with the loving care of our dedicated fosters! 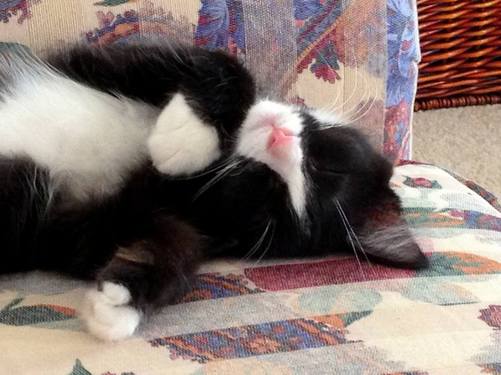 Mischief and her littermates were rescued from Brownfield. Mischief's mom: "I just wanted to thank the Humane Society and especially the volunteers for all their help in getting my adoption of Mischief. She is healthy and happy and so am I! She is such a joy and it couldn't have happened without these wonderful people's help! The Humane Society of West Texas is doing such a fantastic job placing animals....Mischief says hi....when she wakes up of course!!"

Get info about special events, fundraisers, and more!
Powered by